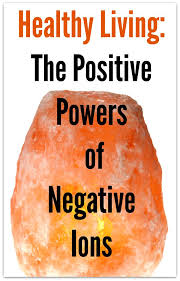 A negative ion is an atom or molecule that’s gained one or more negatively charged electrons.

As the droplets of water are released (due to the “Lennard Effect”), smaller droplets interact with the air, and the air molecules become negatively charged.

If you’re unable to get close to a seaside (or there’s no oncoming thunderstorm), your shower is a readily available source of negative ions.

When you take a shower, the water droplets collide with one another while moving through the air and become negative ions.

After taking a shower, the creation of negative ions is one reason why many find that their mood is uplifted in the morning.

Negative ions are thought to release tension and stress, and thanks to their small size, they’re readily absorbed into the skin and bloodstream to produce their positive effects.

Negative ions can be artificially created by devices such as air ionizers.

Typically, such devices require a generator that uses electricity to manufacture negative ions.

What Are Negative Ions

They’re odorless, tasteless, and invisible to the naked eye.

When we find ourselves near mountains, beaches, and waterfalls, the freshness of the air is caused by the abundance of negative ions.

Ions are molecules, which can carry a positive or negative charge.

Negative ions are created naturally, thanks to the circulation of air in certain environments, radiation, sunlight, and moving water.

Dr. Svante August Arrhenius, a Swedish chemist, is credited with the discovery of negative ions near waterfalls and forests.

He formulated a theory regarding ionization (i.e., electrolytic dissociation).

A study by the US Department of Agriculture discerned that ionizing a room decreased dust in the air by 52% and reduced bacteria up to 95% (1).

This method is modeled on the functions of lighting in nature, which is a natural generator of anions.

A small current of electrons is sent down a needle to this point.

As the electrons come to the point, they get closer together.

Since opposites attract, pairs of electrons repel one another.

And as they jump off the needlepoint, they enter an air molecule and create negative ions.

Negative ions have been studied for their ability to produce positive biochemical reactions in human beings.

When you breathe in air that’s charged full of negative ions a positive mood is created and the levels of serotonin are normalized.

Negative ions are capable of increasing oxygen flow to the brain, which makes you feel more alert and energized.

If you suffer from allergies, negative ions may protect you against germs and particulates in the air.(2)

Researchers at the Center for Sport and Exercise Sciences in Liverpool tested male subjects regarding negative ions.

During the British researcher’s experiment, clients had their body temperature, heart rate, and respiration rate measured during periods of rest and exercise.

While the subjects were being studied and monitored, they were exposed to negative ions.

They found that there was a significant improvement in all of their physiological states, especially while at rest.

How do Negative Ions Work?

Negative ions in the air attach to pathogens (e.g., bacteria and allergens) that cause wellness problems.

Thanks to the electric charge of the anions, the undesirable microscopic organisms are rendered inert and harmless.

However, dust, viruses, cigarette smoke, mold spores, and pollen all attach to negative ions, which can cause concern with the effectiveness of air purifiers and pollution reducers.

Michael Terman, Ph.D. (a professor at Columbia University, has researched negative ions extensively, focusing on cleaning the air, reducing pathogens, and treating depression.
He found that if there’s a high concentration of them in the air, they can have a temporary antidepressant effect in as little as 30 minutes. (4)

At the University of California, research about negative ions showed that they normalized the serotonin levels in the brain, which improved the mental outlook and mood.

After installing negative-air cleaners in a workplace that’s replete with electronic equipment, Norwich Union found that reports of headaches and sickness went down by 78%.

European hospitals regularly make use of negative-ion generators in their institutions because of the wellness benefits that facilitate better recovery rates.

Pierce J. Howard, Ph.D., of the Center for Applied Cognitive Science, reported that negative ions increase the flow of oxygen to the brain, which results in higher mental alertness, decreased drowsiness, and a boost of mental energy.

Tests have repeatedly shown that subjects who’re exposed to high levels of negative ions have better performance when engaging in mentally challenging tasks (as opposed to subjects who breathe in regular air that’s filled with positive ions). (6)

On the contrary, positive ions have been linked to feelings of increased anxiety, irritability, and unpleasantness.

They’ve been held responsible for the oxidization of free radicals in the body, leading to higher acidity levels in the blood and throwing off the endocrine and immune system.

Negative ions are capable of reversing and repairing the damage caused by positive ions.

Better digestion is possible through exposure to negative ions, as they reduce tension in the stomach and intestines and help promote the production of digestive enzymes.

Whether you trust in non-scientific sources or consider the ongoing scientific studies of negative ions on the body and wellness, ions exist.

As ions are biological compounds that are active and continuously surround the body, it’s reasonable to find a connection to reactions within the human body—when there are large numbers of negative or positive ions in the air.

There are companies producing negative-ion generators, bracelets, and other sources, which provide ionization in the air for consumers seeking out benefits.

The shower is one of the main sources of negative-ion production, which were found in homes in urban environments.

Overall, people from around the world have discovered more wellness effects than negative ones from being in prolonged contact with negative ions.