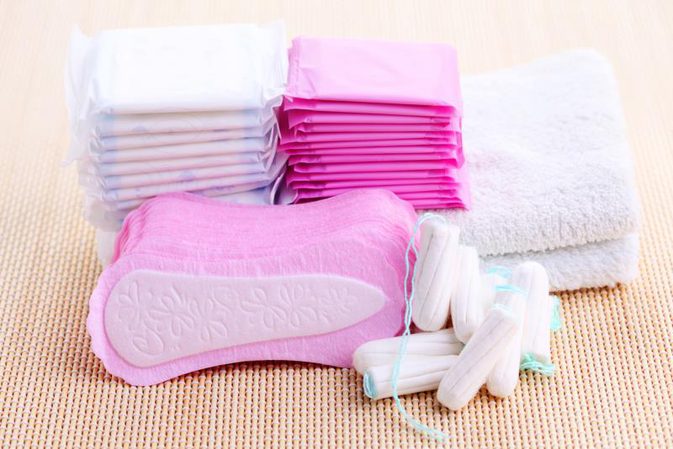 The chemicals used in sanitary pads, tampons and diapers raised concerns throughout the world — particularly near the turn of the 21st century — due to questions about the safety of certain chemicals used in their manufacture, as well as the environmental issues of disposing of them. Because of potential risk factors, some women have opted for organic sanitary pads as an alternative and others have decided to use reusable sanitary pads.

A bill introduced in Congress in March 1999 by Representative Carolyn Maloney of the 14th District of New York — the Tampon Safety and Research Act of 1999 (HR 890) — noted that “dioxin is a byproduct of chlorine-beaching processes used in the manufacture of paper products, including tampons, sanitary pads, panty liners and diapers.” HR 890 further pointed out that the effects of dioxin are cumulative and that the chemical may stay in the body for 20 years after exposure. Unfortunately the bill died in committee.

The World Health Organization lists dioxin as one of the “dirty dozen — a group of dangerous chemicals known as persistent organic pollutants.” Dioxin is a known human carcinogen. The Environmental Protection Agency has studied dioxin, however, and indicated that the largest problem with dioxin is from food, not tampons or sanitary pads. A study published by the EPA in 2002 states that exposure to dioxins from sanitary products “does not significantly contribute to dioxin exposures in the United States.”

A close relative of dioxin, furan, is also found in bleached paper products, including sanitary pads, diapers and tampons. Research published in the Textile Research Journal in 2007 extracted the chemicals found in sanitary pads and tampons throughout the world. While results varied among products, octachlorinated dioxin (OCDD), hexachlorodibenzofuran (HxCDF) and octa-chlorodibenzofuran (OCDF) were detected. These are all banned toxic substances.

Several times over the last few years — in 2003, 2005 and 2008 when it died in committee, and most recently in 2011 — Representative Maloney has introduced the Robin Danielson Act. This legislation directs the Institute of Health “to research health risks to women—including endometriosis and cancers of the breast, ovaries, and cervix—from the presence of dioxin, synthetic fibers, and other additives in feminine products.”